FOR THE LOVE OF LURCHERS...

Cathy writes about her love affair with skinny, crazy dogs… for anyone who doesn't know, a 'lurcher' is a type of mongrel, a whippet or greyhound type crossed with a terrier, collie, deerhound or other dog… and yes, they are all slightly crazy! 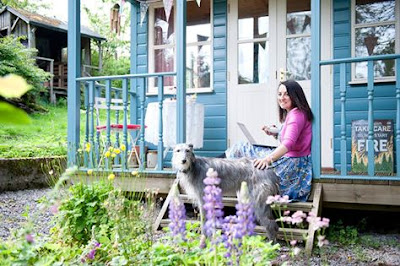 Cathy says:
I've loved lurchers since forever. As a child, we had a whippet and then a mad, rescued afghan hound, and after I grew up and left home my dad collected a small tribe of rescued lurchers. One, Sally, he found lying by the side of the A45 after she'd been thrown deliberately from a moving vehicle. Mad, skinny dogs were in my blood.

Long before I had dogs of my own, I used to draw long-limbed hairy lurchers galumphing through the countryside. I was married by then, and my husband was a postman. Owning a dog was not high on his wish-list, but I convinced him that lurchers were different. We began stalking dog rescue groups in search of the perfect dog, and fifteen years ago we found her. An email arrived with a photo of a sorrowful, grey, spiky-haired puppy with huge feet and a wolfish look. We trekked north to meet her and she jumped up at me and made my lip bleed. 'She's a bit neurotic,' the SSPCA girl said. 'She has already been rehomed twice and brought back again…' 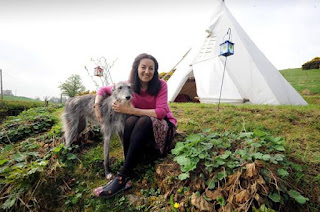 She was 12 weeks old and had been 'born in captivity', her mother found roaming the streets of Glasgow. I was in love. She came home with us. 'She's on probation,' my husband said, but he named her Kelpie and tickled her ears when he thought I wasn't looking. The kids loved her, and the cats and rabbits treated her with disdain and taught her to know her place. Kelpie was clearly part kangaroo, part toilet brush. We lived in rural SW Scotland then, and she raced joyfully across the moors and beaches. She was unruly, over-enthusiastic, a nervous wreck… she was my soul mate.

When I wrote my first book DIZZY, I put her into the story as unruly lurcher Leggit. She starred in lots of publicity shots, looking windswept and gorgeous. I wanted more lurchers, but my husband said one was enough so I lurked on the Facebook pages of assorted lurcher rescues to admire the pictures. That's how we found Finn. He was a collie-whippet cross on Death Row in Belfast, and one of the rescues had arranged for him to be transported to Scotland to be fostered. Could anyone help with part of the transport run? The pleas for help became more urgent, and I agreed to meet the ferry and take the dog to his foster. Could I keep him overnight, the reply came. Or possibly for a week, while they found a foster home? 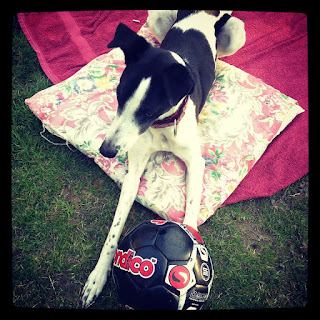 We were told to meet the van in a Tesco's car park at 7pm, and we waited anxiously as if preparing to receive stolen goods. The van arrived, driven by a kindly whippet breeder taking her own pedigree dog to Crufts Dog Show. She opened the door to reveal a doe-eyed, supermodel whippet. 'He's BEAUTIFUL!' I gasped. 'Not THAT one,' the woman sighed, and led a scrawny, cowering, flea-ridden creature on a piece of string out of the van. I'd mistaken the Crufts candidate for the rescue dog. Finn was a nightmare to begin with. He was so thin he squeezed out of the catflap and stood howling outside because he couldn't get back in. He chewed everything in his path. Our lovely vet lent us a crate to give him some security and he was neutered, de-fleaed and given his jabs. He barked all night, every night, for a week.

I had to work away from home for a day, leaving my husband in charge. When I came home, his face was grim. 'That dog is a MENACE,' he said. 'D'you want him for your birthday?' In one short day Finn had declared his alleigance. We became failed fosterers and Finn became my husband's dog, trailing him everywhere. He chilled out, calmed down and the crate went back to the vet, never to return. We love our lurchers. They are beautiful, elegant, fast, mad as hatters. Seriously… you should get one!