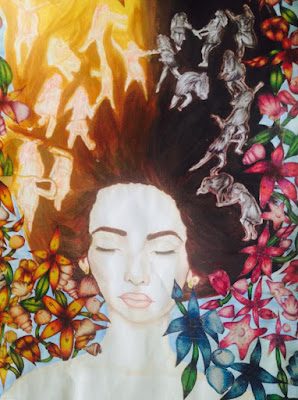 My biggest problem is Generalised Anxiety Disorder, but I have depression too. Counselling controlled the anxiety for a while, and meditation and a less stressful lifestyle all helped. I then moved to college and things got worse - I was having panic attacks almost every day if I hadn't finished work - so every maths lesson, basically. My physical health was also declining and I felt like I had no control over any part of my life. Now, I feel like I am walking a knife-edge between being OK and being back where I was then. Anxiety affects every aspect of my life in ways people don't even understand. It means I have to plan where I go, what I do and have an escape route for everything. I also have to cope with people's ignorance and comments when I'm having a panic attack. There's prejudice too… both of my parents have mental health issues; Mum has depression and anxiety and Dad has depression and asperger's. As well as coping with my own problems, I try to protect them too… and that brings me to my biggest coping strategy - helping people! My anxiety lessens if I am helping others and have a purpose, so that's what I do!

Linz says:
I went to the doctor at about fourteen with suspected anaemia, but the tests came back negative and they suggested it could be anxiety. I didn't think much about it until uni when I began to get lots of symptoms and went back to the doctor - he said at once that my anxiety was through the roof. My heart was beating at twice its usual rate and my hands were shaking. I was diagnosed with Generalised Anxiety Disorder and mild depression and given the option of medication or CBT (a therapy which can help you to change your outlook and beliefs). I chose CBT and regular sessions really helped; it took a big, BIG step to turn up at that first session but the therapist was very kind and I am so glad I did! Now if I get anxious, I remember what I learned in the sessions and it helps me in so many ways. If anyone is struggling with the same things, I highly recommend trying CBT  therapy.

Mariel says:
I have real problems with my moods and this seems to be linked to my periods. For part of the month, everything is fine, and then I get very moody and short-tempered and it's almost like being a different person. I can see myself doing and saying things that are mean and unreasonable but I cannot seem to stop it. My friends are fed up with it, and my family must despair of me because I know I am a nightmare to live with at that time. Then, for a few days of the month, that nasty streak evaporates and I am ultra-sensitive instead… the slightest comment can make me cry. My mum has been trying to get me to go to the doctors but I don't want to go, I suppose I don't think they will take it seriously. But deep down I know that I will have to do something, because it is not getting any better and it seriously makes my life a misery.

Alima says:
I had a bout of depression last year after leaving secondary school and I suddenly understood what people mean when they say they can't see the point of anything anymore. I wasn't just feeling a bit 'sad', I was totally cut off, my arms and legs felt like concrete. The feelings of sadness and darkness engulfed me and until I was numb and everything I had planned fell through my fingers. There was no possibility of going to college… I could barely get out of bed. My mum took me to the doctor and I was put on anti-depressants and given counselling. It took a while for things to change, but once the meds were right the depression did lift. I have just started sixth form college and it feels like a second chance to live my life. This time last year, I couldn't see a future at all.

Names have been changed at the request of those contributing.

Awesome artwork by reader Claire: many thanks!

Cathy says:
Thank you to Eloise, Linz, Mariel and Alima for their honesty in talking about such a difficult subject. We are used to going to the doctor for help with a physical problem, but asking for help with mental health issues can be much harder. Have YOU ever struggled with these kind of problems? COMMENT BELOW to have your say...
at September 27, 2015