MY AWESOME HOLIDAY: IN CORNWALL!

Reader Katerina shares her story of a cool summer break in Cornwall… and tells us about the new friends and new skills she discovered there! 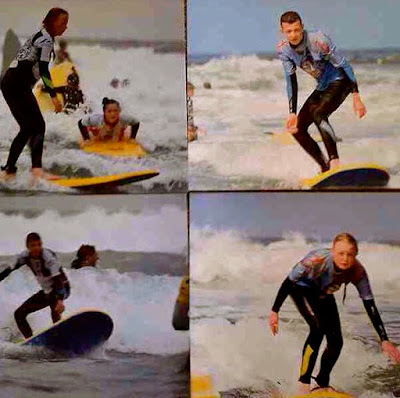 This summer my dad went to a reunion of the friends he was at university with. We travelled down to Cornwall and stayed at a place called Treharrock, a giant house that used to be a hotel… one of my dad's friends owns it, I think! The house has 14 bedrooms, 3 showers, 4 bathrooms, 3 living rooms and a giant kitchen, as well as a utility room and dining room. We filled up quite a bit of it as Dad's university friends had families too - there were lots of children and teenagers to get to know! Mum and Dad had visited Treharrock in 1994 but I never had, so it was all very exciting. The adults shared to cooking and there was a party atmosphere every night. Everyone was great, and I made friends with three really nice girls (the daughters of some of Dad's uni friends). We shared a room and before long we bonded, and formed the Squid Squad! (Loooong story including inside joke!)

On the first day we all went to the beach and explored giant caves… then we sunbathed for hours! The next day we went surfing… it was my first ever time and it was so much fun! We had a lesson and it was very difficult, but worth the hard work. The first part of the lesson we spent surfing on our tummies which was easy enough… but then we had to stand up. I FINALLY managed it and it was brilliant!

That night was the last night… we did a giant treasure hunt that was so interesting and difficult, followed by a general knowledge quiz and finally we all played a mad game called Sardines! Sardines is basically one person hiding and if you find them, you have to hide with them, but all in the dark! I got to hide once and it was so much fun! Our summer was full of adventures and trips to friends and relatives, travelling all around Britain… but the two days in Cornwall were just unforgettable. I cannot believe how lucky I was to be a part of it all!

Cathy says:
Wow… I am so jealous! Treharrock sounds like a real-life Tanglewood, come to life… and the new friendships and surfing lessons sound just perfect. Have YOU had a holiday to remember this summer? COMMENT BELOW to tell us more!
at September 05, 2015