Readers talk about the CC characters they identify with most… and why. Awesome stuff! 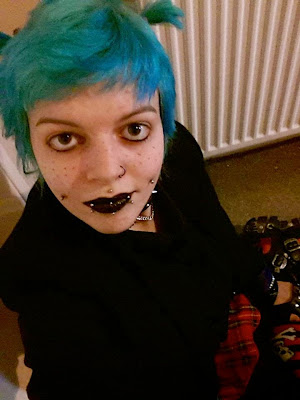 Blue says:
I like Joey Donovan from the book DRIFTWOOD because she's cool and careless - at twelve years old, most people are worried about what others think of them and are desperately trying to blend into the background, but who wants to look like everybody else? Not Joey! I like that she's smart and loves animals because usually, characters in books who dress out of the ordinary are portrayed as 'baddies' - but Joey is just a sweet kid who works hard and has incredible dress sense! It was easy to style myself as Joey as I already own the kind of clothes and accessories she would wear, and also because I was similar to Joey at that age, if only in style. I didn't quite get to echo Joey's rainbow hair but I did draw on some freckles. It was fun to revisit my youth and remember my schooldays. I'm only two years out of school, but still… dressing up is fun! 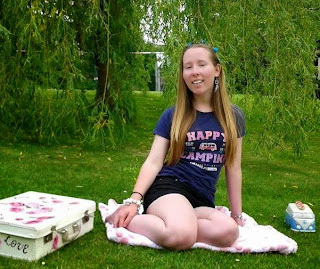 Jess says:
DIZZY was the first CC book I read, and it opened up a whole world of adventures! I probably don't have a whole lot in common with the character Dizzy - although over the years I have definitely developed a passion for all things festivally! It also seems I have a similar taste to Dizzy when it comes to boys: cute, musical and with a caring nature! It was fun to set up the photograph - I liked the camper-van ornament and the crazy decorative suitcase, because they gave a festival flavour to it all. And the trees and grass give a countryside feel, too! 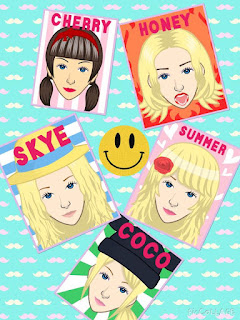 Briony says:
I absolutely love the Tanberry-Costello sisters and that's why I made this picture, using an app called Avatar Creator. I then put them all into one image using Pic Collage.The sisters from the CHOCOLATE BOX GIRLS series are all so unique and each have their own great story to tell - and their own style, of course! Coco's tomboy style is my favourite, and she is my favourite sister. She is only twelve but she doesn't let her age stop her from doing anything she wants to… she has bake sales to raise money for charity and works at the stables because of how much animals mean to her. She is inspirational and very much her own person… I love that!

Cathy says:
I love that my characters have inspired you… how cool? Which CC character is YOUR favourite? COMMENT BELOW to have your say!
at September 29, 2015