Have you ever been the star of the Christmas play… or did you always get a bit-part? Readers share their Christmas memories! 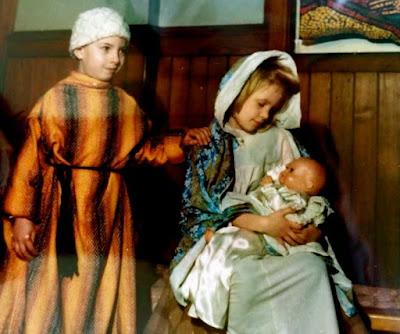 Lynne says:
Even though this photo must have been taken about 51 years ago when I was about eight, I still remember some of that day. I was playing Mary in the school nativity play and I was so excited! I am wearing my nightie and a cloak made out of an old curtain. I remember having to knock on various doors trying to get a place to stay and having to stay in a stable, which was the school cloakroom! The boy playing Joseph was called Louis but he was only at our school for a wee while. I loved being in the nativity and still look back on this memory very fondly!

Emily says:
I've played a star (had to wear a really stupid costume for that!), an angel (ridiculous oversized wings) and even Mrs Claus in past school plays...

Sophie says:
I once played the main role of Mary and had to sing two solos… I remember being really scared and practising in front of my parents and friends who loved it!  I didn't really get along with the boy who played Joseph, though. My school was small and there wasn't much cash for costumes so I had to wear a sort of princess dress… I'll never forget it!

Violet says:
I never had an acting part but one year I had to play the glockenspiel. I was glockenspiel player no. 21 or something! It didn't measure up to my brother's run as the innkeeper when he was in P7. Everyone told Mum how lovely her son's performance was, but nobody mentioned my talents on the glockenspiel. Woe is me!

Lorna says:
Our primary school Christmas plays were so elaborate because everyone in Key Stage Two was in it, every year. In Year 6 I had the main part… a librarian with two donkeys! That year all the scenes were from books and we raised money for a library pulled by donkeys in Africa! 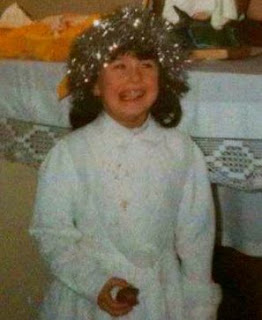 I was the angel… of course! That's me in the tinsel...

Grace says:
I was the donkey… I had one line to say, but when it came to my big moment I looked at the audience and burst into tears, and the teacher had to come on stage and comfort me! I was so embarrassed!

Charlotte says:
When I was seven or eight I played a shepherd in the nativity with two boys. I had to have a beard painted on my chin. I don't know why they wouldn't just let me be a female shepherd, but I enjoyed it all the same!

Katie says:
I remember my headpiece magically disappearing when we did our junior play. I was the narrator and the play was Babushka, where a little old lady gives everyone presents. There were all these beautiful Russian dancers in ornate headresses, but my headress was lost and my fellow narrator had to do without one too so we didn't look odd. Oh well!

Amber says:
My best friend and I wrote the Christmas play in Year 6, which was awesome. We also got first choice of who we wanted to be, so I gave myself the role of narrator. I dressed up as a woodland fairy and it was fantastic!

Boo says:
I was a singing donkey! Originally I was just a donkey… the teacher told the class to be silent while my friend sang a solo and I was daydreaming until I heard the music and then without thinking, I burst out singing, louder than the soloist. The class told me to shush and I realised what I'd done but the teacher said I had a great voice and suddenly I was a singing donkey and had my own unique role!

Cathy says:
Wow… what was YOUR best part in the school Christmas play? COMMENT BELOW to have your say!
at December 19, 2015