MOLLIE CINNAMON IS NOT A CUPCAKE...

Irish writer Sarah Webb tells us all about her new book, Mollie Cinnamon is not a Cupcake! 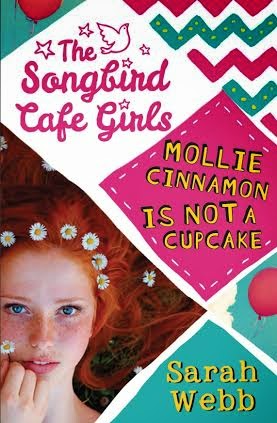 Sarah says:
My new book is called Mollie Cinnamon is not a Cupcake and is set on a fictional island called Little Bird. I've always loved books about islands and a few years ago I stayed on a small island called Cape Clear, off the coast of West Cork, in a yurt… a round, Mongolian tent. At night I lay on the grass outside the yurt and stared up at the stars and wondered what it might be like to live full time on a small island.

It would be quiet, that's for sure… with only the sounds of birds, waves and the odd dog barking or a tractor humming in the distance. And then my writer's brain started to kick in. I began thinking about island teenagers and how different their lives might be. What kind of things they might do. Where they might hang out.

On the ferry home after the trip, I decided I would create my own island, Little Bird, and write about it. I gave Little Bird a very special cafe at its heart, the Songbird Cafe, a place where everyone on the island meets. Finally, I put Mollie Cinnamon on the island, a girl who is used to city life, an outsider, and then I stood back and watched as the island's magic began to cast its spell…

The Songbird Cafe Girls: Mollie Cinnamon is not a Cupcake is out NOW!

Cathy says:
Sarah's books are warm and fun and perfect for CC readers looking for something new. Check out the first in Sarah's fab new series… and watch out for a special recipe from the Songbird Cafe on tomorrow's DREAMCATCHER! Would you like to live on a small island? COMMENT BELOW to have your say!
at March 08, 2015