HALLE: SPEAKING UP FOR THE ANIMALS

Reader Halle felt so strongly that animals should not be used in circus shows that she joined a demonstration to protest about it… read on to find out why!

Halle says:
I was walking home from school one day and passed the site where the circus had parked up. I saw the tigers in their cages, walking back and forth with just a metre or so of space in their cages. When I got home I told my nana about it and she told me there was going to be a protest. I put on my tiger onesie and went along to protest with my nana. I disagree with the use of animals in circuses because I think it's cruel. The animals are whipped and forced to perform against their will - plus, animals like tigers should be free and in the wild. Animals are much like us, they have feelings, they can get very stressed and feel fear just as we do. The way I think people should see it is, imagine having your child taken away from you and forced to perform for someone else's entertainment. It's just wrong.

There are lots of things I would like to change right now for animals in circuses. I'd make sure there were bigger enclosures for all animals, and make it illegal for wild animals like tigers to be used - I would send them back to the wild or if that was not possible, then settle them in a sanctuary. As for animals like horses and camels, I would make sure there were no sticks for them to be poked, hit and 'trained' with. 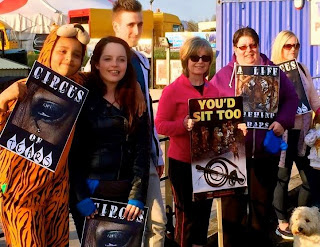 At the protest, my nana and some of her friends were there so I didn't feel anxious or alone. People had signs and banners and we were trying to let people know what really goes on. There were two girls who turned away and went home when we told them about animals being whipped, but I saw a lot of people I knew go into the circus. That didn't stop me from protesting - I wanted to speak up for the animals. I suppose I have always had strong feelings for animals. I once saved a little kitten, the runt of the litter - she's called Rascals and I love her. I love all animals.

Changing things takes time, but I believe if we can raise awareness of how animals are treated in the circus, people would understand why it's wrong. For now, I'd advise people not to attend circuses that have wild animals. It's about raising awareness, really. If parents start teaching children from early on that it's wrong to keep wild animals in cages, then perhaps circuses with wild animals will finally become a thing of the past.

Cathy says:
I totally agree with Halle… I can't believe we still have animal circuses in 2015. To me, they seem like something from the dark ages and not the kind of 'entertainment' I would ever want to be a part of. And of course, COCO TANBERRY would agree as well! Have YOU ever joined in with a protest or stood up for something you believe in? COMMENT BELOW to tell me more...
at June 04, 2015