Reader Marianne goes to an international school in Tanzania, on the slopes of Kilimanjaro in Africa… she tells us how riding helped her to settle into her new school. 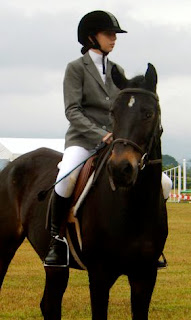 Marianne says:
When I first started at ISM, an international school in Tanzania, I found it very hard to settle - until I found out that my best friends Laura and Jessica were having riding lessons. I went along to the stables one day and met Terrie, who owns the stable and the horses, and arranged to have a sample lesson with Priva, the main teacher. I loved that first lesson and rode a horse called Mango; I knew straight away I wanted to have riding as my sport. I soon progressed and was allowed to ride Mr Bean, a more advanced horse, although I was warned I couldn't really jump on him as he was scared of the jumps and tended to stop, making the rider go flying!

All the same, Terrie wanted me to ride Mr Bean in a horse show in a small town called Maji Ya Chai, nearby, so I began training. It was mostly dressage, but in my last lesson before the show Terrie led me over some low jumps. It was very scary, especially when she asked me to go by myself, and sure enough Mr Bean stopped and refused to jump, but I didn't really mind.

The day of the horse show was very wet and I was worried that Mr Bean would slip in the rain. As I mounted, I noticed that my hands were shaking with nerves, but I had no time to try to calm down - I was already late for the first off leading rein event! I did OK though, especially considering I hadn't practiced this event before. My next event was the dressage. The sun came out, which made Mr Bean tired and I couldn't get him to trot, so I didn't get placed in the end. Then it was lunchtime, but I was so nervous about the show jumping that I didn't eat a thing. When the time came, I rode Mango as she is good at jumping, and I cleared all the rounds and won second place. I loved being in the show, even though it all seemed quite posh and serious - and I love riding, because it's such a brilliant hobby and helped me to relax and settle into life in Tanzania!

Cathy says:
Wow… horse riding on the slopes of Kilimanjaro? How awesome does that sound! Fab feature, Marianne - and well done in your first horse show! Have YOU ever taken part in a horse show? Are YOU pony mad? COMMENT BELOW and tell us more!
at July 25, 2015