Readers talk about their fave winter boots… how cool are they? 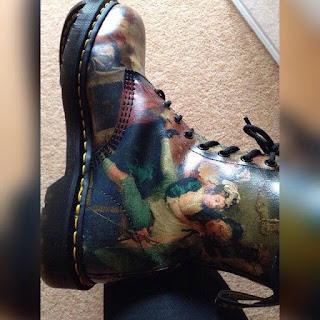 Kym says:
I LOVE wearing DMs. Dr Marten boots were originally created by a doctor who injured his foot while on leave from Word War II, so they are very sturdy and comfortable and now come in a variety of designs. The newest collection have prints of the artwork of 18th century painter William Hogarth! Over the last few years I have started wearing DMs every day - I even bought a pair just to wear for school. They are expensive but they outlast most shoes - a friend of mine had a pair that lasted eighteen years! 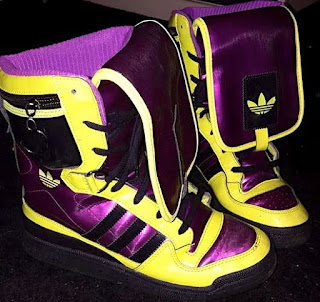 Stacey says:
These are my current favourite boots… they are stunning Adidas x Jeremy Scott tall boy hi-tops, and were supposed to be £189 but I got them for a bargain £50! I fell in love with them the minute I saw them - they are as unique as I am! They also remind me of the Back To The Future movies! I love all things 80s retro and that's exactly what these bad boys screamed at me. They are the comfiest boots ever and have already had many adventures… they've seen multiple bands including Reel Big Fish last month and are brilliant for skanking the night away. I get quite a few odd looks when I'm wearing them, but that's OK 'cos I know the boots are different and awesome, just like me! 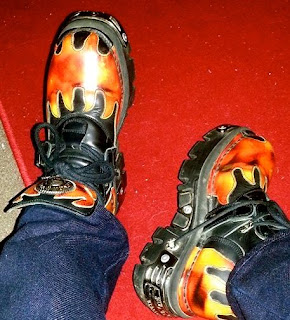 Violet says:
These are my second pair of New Rock boots - they're ankle height and have flame patterns on the toe and heel and metal accents on the sole. They were given to me by a friend last year… she got them from a charity shop for £25 - they're usually around £80 - because an eyelet on the inside sole is missing. They were a size too small for her and she wanted them to go to someone who would appreciate them, which I certainly do! They are actually a size too big for me, but that's nothing thick socks can't sort out. I love my boots because they look amazing and give a punky edge to whatever I'm wearing - that's a good thing! They're also pretty comfortable considering they're a little big and weigh as much as a small house due to all the metal details. I wear these boots all year 'round… who said boots were just for winter?

Cathy says:
Wow… three very different but equally awesome pairs of boots! I love! If I had to pick, I'd probably go for the Hogarth DMs… which ones would YOU choose? If these don't grab you, what style would you go for instead? COMMENT BELOW to have your say!
at November 21, 2015