MITCHIE: I WROTE A BOOK!

Reader Mitchie tells how she came to write and publish her own book at the age of just fifteen… impressed? Read on, you will be! 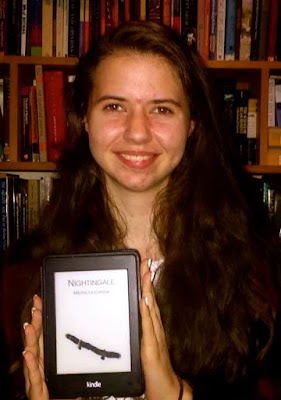 Mitchie says:
Writing a book takes time. Every day I would come home from school and write one thousand words. Some days were easier than others. Sometimes I'd sit at my computer for almost five hours, trying to figure out what to write and if any of it even made sense. Sometimes I would be done almost immediately and would jot down notes about the next couple of chapters because I was on such a roll. But now, a year and four months later, my book is finished, edited and available on Kindle for everyone to read.

NIGHTINGALE went through a lot of different versions before this one. Frentiss was once a girl called Hanna, and some characters didn't even exist. Much of the plot went through about four re-writes, but hey, that's sort of how it works. You have to want to write. You have to want to be able to finish and keep going, Like I said, it takes time! I hate planning stories with a passion - I always have a very undeveloped idea, or maybe an ending, but I never know how to put it all together. I came up with the idea for this story two years ago, but didn't start writing this version until last April. I finished at the beginning of August and it's only now being published. It's not easy, I can promise that. But I love it. That's partly why NIGHTINGALE exists now.

People had a huge input into the story. One of my best friends Lily would sit with me in History class and I'd ask for advice on the next chapter, or how to make a scene less clichéd. My friend Stevie named Frentiss and read early drafts of the book. My aunt is a published author and gave me tips and motivation throughout. Cathy Cassidy, a friend of my dad's, supported me and encouraged me not to give up. Even agents and publishers told me never to give up - a lot of people supported me and were interested in what I wanted to do. They helped me get there, and I will always be grateful for that.

You can download a copy of NIGHTINGALE here for just 99p… what are you waiting for?

Cathy says:
I've chatted with Mitchie a few times about writing, plotting and following your dreams, so I am thrilled to see that she's worked so hard to turn her dream into a reality! I'm off to download a copy of NIGHTINGALE right now… how about YOU? Have you ever tried to write a book? Or succeeded? COMMENT BELOW to have your say!
at November 28, 2015