ROSA: MY SISTER HAS AN EATING DISORDER... 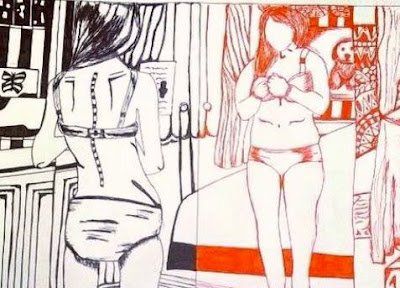 Rosa says:
My sister Jo is fifteen and I haven't seen her for three months. She is in hospital being treated for anorexia and the special unit she is staying in is almost 100 miles away, so although my mum and dad go to see her every weekend, I don't. And Mum says she wouldn't want me to see Jo at the moment, because she is so ill. I write to her, but she hasn't replied, and that hurts… I'm thirteen and all my life Jo has been my hero, and now she's so far away and she doesn't seem to remember me at all.

I hate her illness. Anorexia took my beautiful sister and ruined her, turned her into a person none of us even knew anymore. We tried to help but she was so clever and tricked us to go on hurting herself. Jo was very beautiful and always slim, and I didn't notice at first how obsessed she was getting with her size. I only know because I read her diary from last year, which makes me a bad person but I don't care because it had lots of entries about how how some boy had told her she could lose a few lbs and about how upset she was to have to buy a pair of size 10 jeans instead of an 8. She stopped eating and wrote about how she looked in the mirror and saw this huge, obese person looking back. When I found the diary I showed Mum, and that is how we found out really because up until then she had done a great job of covering it all up. Jo was so angry, though, and things haven't been the same for us since, but Mum says that one day when she's better she will thank me. I wish I believed that.

I suppose I wanted to write about Jo because it is very hard to be the little sister of someone who is trying to starve themselves to death. People say it is a sickness and I understand that, but Jo's sickness has destroyed everyone in the family. I hate it so much. I want my sister back. I want her happy and healthy and beautiful, not the skeleton girl she is now. She thinks she looks great, but she really doesn't.  Sometimes she looks like a little child, but a very sick one, and sometimes she's more like an old lady. In the middle of the night, I lie awake and think of her and wonder if she ever thinks of me, or if I am just the little sister with puppy fat she has left behind. Selfish, I know. Like I said, anorexia is destroying us all.

The powerful illustration for this feature was drawn by reader Courtney. Many thanks.

Names have been changed to protect identities.

Cathy says:
A heartbreaking post about how eating disorders can harm a whole family, not just the person with the illness. Sending love and support to Rosa and Jo and their family. Have YOU or someone you know struggled with eating issues? COMMENT BELOW to tell us more...
at November 22, 2015