Cathy says:
Earlier this year, we were having a meal with friends and talk turned to ghost stories. Our friends told their ghost story, and we told ours… it went like this: 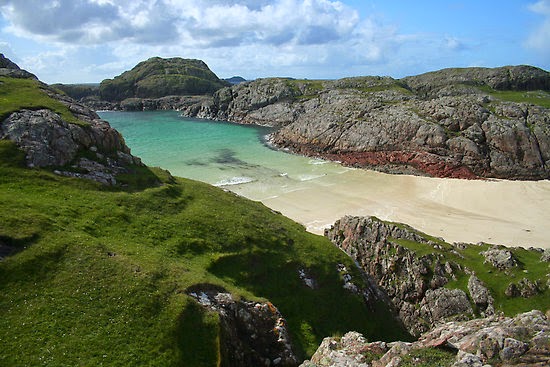 Long ago, before we had kids, my husband and I went on a camping holiday to the Isle of Iona. We made friends with another couple while cycling across Mull, and when we reached Iona we set up camp with them on an outcrop, a kind of promontory sticking out into the sea. To get to the camping place we had to climb up a hill to reach a flat place just perfect for two tents; beyond us the rocky hill rose higher, dropping away to cliffs. We were surrounded by sea on three sides.

It was approaching dusk when I looked up and saw the figure of a woman standing up on the hill up above our campsite. I almost jumped out of my skin, so shocked I couldn't speak and just shook the others, who soundlessly looked up to see her too. She had long, untidy hair and was wearing a long cloak… I imagined her to be some kind of hippy-dippy type. What none of us could work out was how she had got up onto the hill, because the only path led right through our camp and we had been there for hours. Worse, she looked distressed and upset, looking out to sea; it felt wrong to stare, and slowly, all four of us looked away, whispering our worries that she seemed to be in trouble. We couldn't help but look back, and when we did she had vanished. Terrified and convinced she had fallen, the boys clambered up the rocks to where she had been while the other girl and I ran down to the beach beneath the cliff where we'd last seen her. We were terrified she had thrown herself into the sea. We searched until it was too dark to see, and then we went to sleep, all of us very shaken. 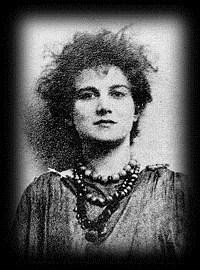 The next day we woke to find our friends had packed up and gone, leaving a note to say how spooked they were. We searched again, expecting to find a body, and when we found nothing we walked into the village, expecting reports of a missing person. We asked about a little, but nobody knew what we were talking about; nobody was missing. At this point, it began to dawn on us that the woman we'd seen could have been a ghost - her cloak certainly lent her an other-worldly air, yet we'd been so sure she was real. We called in at the tiny island bookstore looking for ghost books, but found nothing; later that day we too left the island. No reports were ever made of anyone committing suicide or going missing, and we began to refer to the incident as our 'ghost story'.

So… that was the story we told our friends over dinner. 'Was she a ghost?' they asked. 'Did you ever google her?' We explained that this had been long before google or the internet. 'Of course… but haven't you googled her NOW?' they asked. We had never even thought of it. My daughter fetched her laptop and typed in 'ghost Iona'… and a chill ran through us all. There she was… a woman called Netta who had lived on the island briefly in 1929. She had been involved with the occult and had been distressed and anxious when she vanished from her lodgings. Her body, wrapped in a long cloak, was found on a 'fairy hill', still clutching a dagger as if she had been trying to ward off danger. An inquest said she'd died of natural causes, but many believed she had been harmed by the dark forces she had run to the island to escape from. The details and even the photograph of Netta were so close to what we had seen; our ghost story suddenly seemed very dark and sinister, and our friends even joked that we'd set the whole story up to scare them. We hadn't. We were really shaken by it… all over again.

Do I believe in ghosts? I think there times when history leaves strong traces on the present day, when shadows of the past fall over our present day lives. What do YOU think? COMMENT BELOW to share your views. And be careful if you ever visit the Isle of Iona...
at October 30, 2014