I've had my old teddy ever since I can remember... in fact, it's older than me. Along with a few of my adult friends, I'm telling all about my favourite childhood toy... 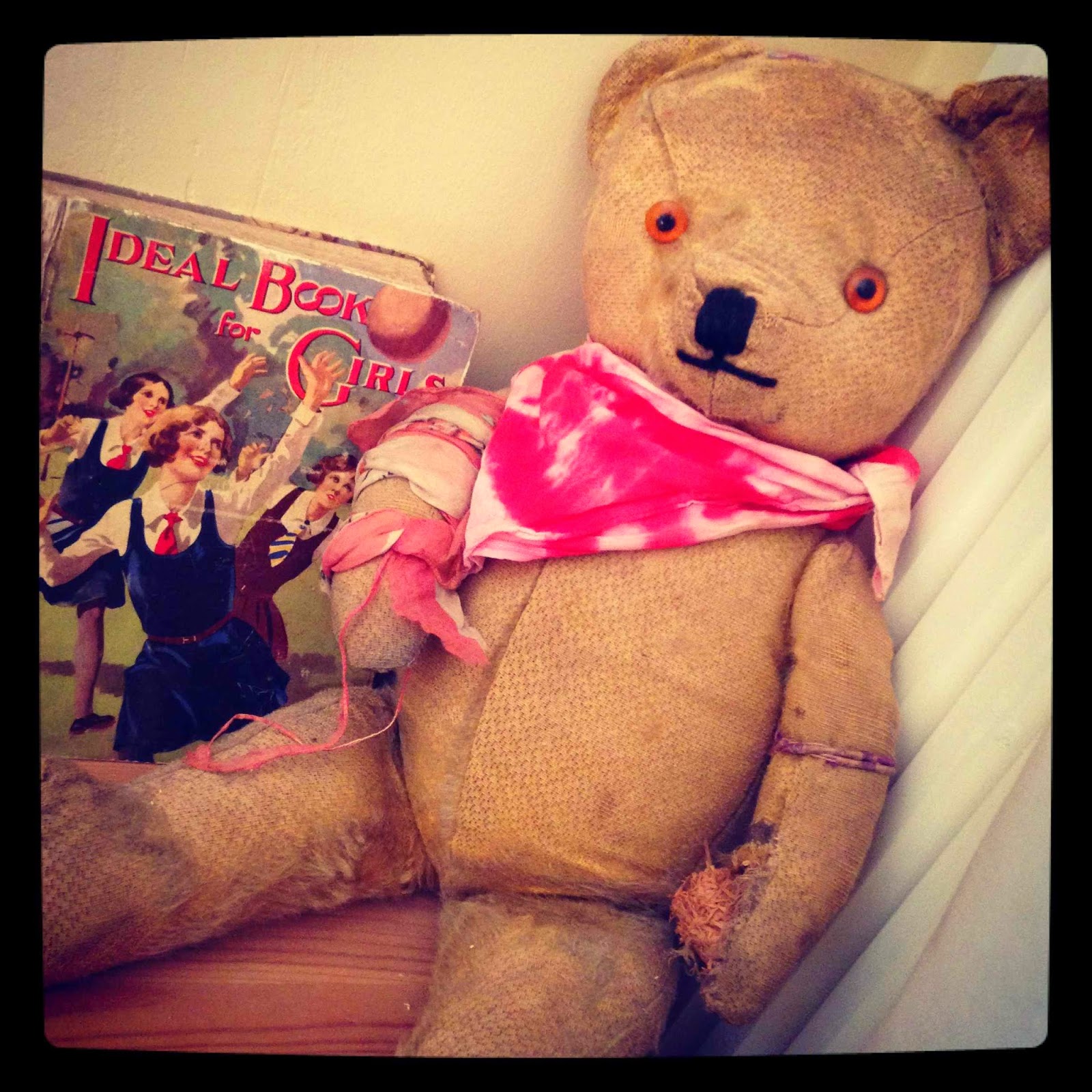 Cathy says:
My teddy was hand-made by a friend of my dads. He had golden fur and glass eyes and soft leatherette on his paws. His nose and whiskers were stitched on in black wool yarn and when you turned him upside-down, he growled. Over the years, he was loved and hugged so much his fur wore away completely and sawdust began to leak from little holes in his skin. One ear came off and had to be sewn back on because that was how I carried him about when I was small. His paws wore away and his whiskers came loose and he stopped making a noise at all, but I loved him. His name was Big Ted - imaginative, wasn't I? When I left home to go to art college, I took him along and he used to sit on my dressing table wearing a big floppy vintage hat, looking cool. These days he sits on a bookshelf in my workroom and wears a friendship bracelet my husband gave me when we first met, a vintage scarf bandaged around one broken arm and a tie-dye bandana my son once wore as a bib. Over the years a mismatched crew of other vintage toys have joined him, mostly rescued from jumble sales and junk shops. Toys that were once loved deserve to be loved still, not thrown out with the rubbish. Is there such a thing as a Vintage Toy Rescue? I think there is. I think I might actually run one... 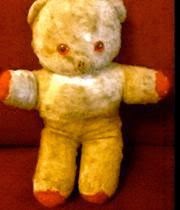 Alison says:
I don't remember when I first had Jim. He was my first teddy and therefore my favourite. People would often ask why he was called Jim and I would reply, 'Because he's got red legs!' When I was in the infants, I used to read the Nurse Nancy stories from Twinkle comic to him, then acted them out with Jim as my patient. He endured injections, plasters, bandages and slings. My favourite game was schools, and Jim was my star pupil - I taught him to read with miniature books I'd made him. At eighteen, I went to university to study for an English degree, and left Jim behind; I then trained as a primary school teacher and went on to teach children to read. When I bought my first house, I took a box of my old things from the loft of my parents' house and in it was Jim. I now train primary school teachers and Jim sits on my bookshelf along with favourite books like Mick Inkpen's 'Threadbear' and Jane Hissey's 'Old Bear'.

Che says:
I still have Pinky, a rather flat and dull looking teddy I found in a puddle in Cork when I was a child. Pinky is so flat I could fold him up and he hid in my pocket for years - at school, at home, everywhere. When i was upset I could put my hand in my pocket and feel he was there. These days, he lives in a drawer with my knickers and bras and still smiles up at me first thing every morning! 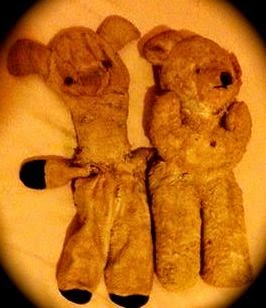 Natalie says:
When I was eighteen months old I got seriously ill with bronchial pneumonia and in those days, parents were not allowed to stay with their kids when they were in hospital. I felt very alone and as well as being ill, I missed my parents terribly. I was in hospital on and off for over three years, and these two teddies, White Ted and Blue Ted, were my lifeline - they became substitute parents in a way. I wouldn't be parted from them, and once I left one behind by accident and we had to drive fifteen miles to the hospital to get it back! These days I am in good health and run my own juice bar, but I still have these teddies and couldn't bear to ever throw them away, even though they're completely mangled now! They meant the world to me back then, and I will never forget that.

Do YOU have a soft toy or teddy that you loved to pieces when you were little? COMMENT BELOW to share your stories, or tell us which of the teddies/ stories above you liked best!
at May 04, 2014