Have you ever wished you had the courage to dress the way you really want to - even if it means some people will judge you for that? Rhi, who once loved my books SCARLETT and DRIFTWOOD, has a strong, striking style that both Scarlett and Joey Donovan would be proud of! 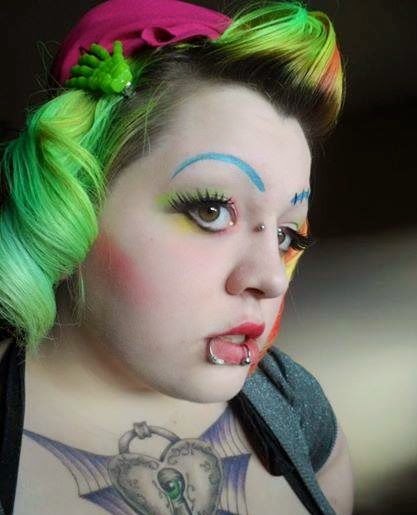 Rhi says:
I don't know if one particular thing has influenced me as far as style goes. My parents have somewhat odd dress sense - my mum likes retro stuff and my dad's a punk, so it was always kind of there. I don't even think too much about standing out from the crowd - it's all perspective as far as crowds go. In some groups I stand out, in others I don't!

My style has evolved a lot. I suppose it started when I was fourteen during the great emo phase, and I went through a lot of looks before I settled on what I look like now. I'd say my style is heavily influenced by 1950s horror movie villains and the 1990s Riot Grrrl movement. I guess my style icons are Allison Wolfe, Tank Girl and Kim Shattuck. My first tattoo was on my eighteenth birthday, a character called Ragamuffin from a comic book series, on my right arm; I am currently on twelve tattoos and working on more. My first piercing was a silver bar in my bridge when I was sixteen. 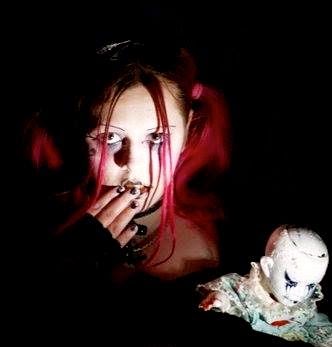 I have had my hair pink, purple, lilac, blue, turquoise, grey, black, brown, red, orange and yellow, but my favourite and most often used is bright green. I get my clothes from a bunch of different places. A lot come from the high street and I just do them up to my taste; the rest I find on Etsy.com. My style is in a way linked up to some of my musical taste; it's heavily influenced by the Riot-Grrrl movement of the early 90s so I wear a lot of girly dresses, fake leather boots and schoolgirl shoes. I have bright red lips as my war paint and big but subtle eyes and messy hair. 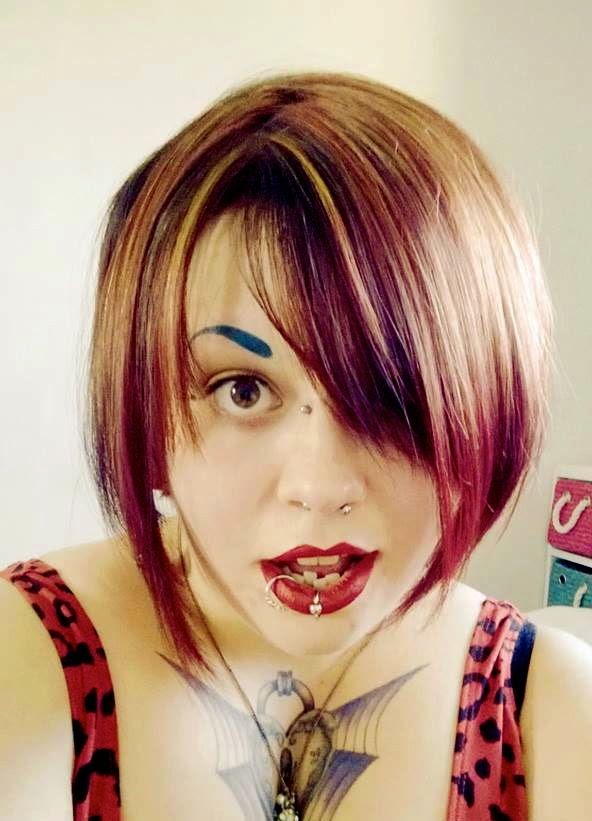 People's reactions to the way I look vary. Some love it, some don't notice and some people insult me; some have even assaulted me. The thing most people react to is body hair - I don't shave my legs and have no problem getting my legs out, and it seems like that is the strangest thing a woman can do these days. I get a lot of questions and nasty comments about that. I think there came a point when I realised people were going to make fun of me whatever I wore, so I decided I might as well make it worthwhile. I got bullied a lot back then and I'd been scared for a while to do anything that might draw attention - then I just kinda got sick of pretending. I remember getting into a whole lot of trouble about how I dressed at school. Sometimes the reactions are pretty awesome, though. My favourite was when a little girl asked to feel the tattoos... it kind of makes the bad stuff worth it!

Basically, I love my body and I love the way I look, and I like to own it... this is who I am!

Cathy says:
I love Rhi's confidence and her awesome style... how about you? Would YOU have the courage and confidence to follow your own style, even at the risk of being teased or picked on? Why - or why not? Why do you think we judge people on appearances? COMMENT BELOW to have your say!
at May 04, 2014