THOSE BOOTS ARE MADE FOR WALKING...

Do you have a fave pair of shoes that you just know you'll wear until they fall apart? We asked CC readers to share their fave shoe stories... and they are COOL! 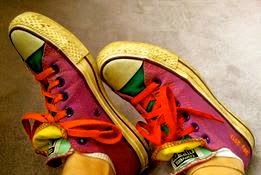 Isobel says:
These are probably my favourite ever shoes. Designed by myself - nobody can have the same shoes as me! When they arrived seven weeks later (it was a long wait!) I fell in love with them. I put different coloured laces in and bam, I was ready! I waer them all the time - camping, guides, crew, theme parks and more. They are slightly muddy (I may have trodden in a bog) but hey, what would we do without a bit of adventure with our shoes? Mud means memories! 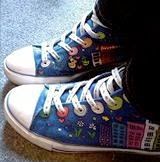 Emily says:
I had these shoes for almost two years. I bought them while I was shopping in town with my sister and they were quite expensive - £30 in a sale - so I took a while to decide. I am so glad I bought them, though, as I wear them constantly! The sides are starting to split as I wear them so much, so I have to be extra careful with them now! I've had lots of comments from people saying how cool they are. The design on them is by the artist James Rizzo - there are people, peace signs, and allsorts on them! Sporting his work on a pair of amazing shoes like these is just the best! 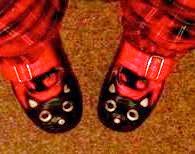 Blue says:
My favourite shoes are my New Rock boots, which suit every outfit from dresses to punky get ups. I wear them every day and they're great exercise as they're so heavy! These, though, are my TUKs kitten shoes - a friend of my sister's gave them to me and I wore them all the time when I was thirteen or fourteen. My classmates were divided on whether they were 'smart' or 'kid's shoes' - they are the former, obviously! The soles of the shoes have bone patterns on them which made walking in the snow/mud especially fun. The shoes are now ripped as my little brother (ironically bigger than me, even in shoe size) tried to stuff his feet into them... and failed.

Lauren says:
When I went on holiday to Bamburgh in England, we were doing some shopping when I noticed these shoes. They really stood out to me - I'd never seen anything like them before and I just knew I had to buy them! They are white boots with Union Jack laces and a Union Jack on each heel. I love them for the fact that they are quite unusual; I have yet to see another pair the same. They are also really comfy - and I always get compliments about them! 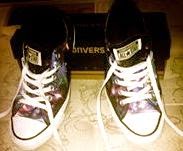 Heather says:
I was window shopping in my local town when these beauties caught my eye. It was love at first sight... it was like the shoes were screaming my name! I dithered for a while over whether to buy them - they were a bit pricey, but they were literally my dream shoes and so snazzy and quirky. In the end they were a must-buy and I have never regretted it - love them to bits! Kiki says:
I first got my shoes about a year ago... they just really stood out. I slipped them on as soon as I'd bought them, and I pretty much haven't stopped wearing them since! I've worn them to picnics, to parties, to walks in the park and even on holiday! My shoes look a little worn now, but I wouldn't have them any other way because I've had so many adventures while wearing them - they've almost become a part of me! I could identify every little smudge and even tell you where they came from! It sounds silly, but I take pics of my feet every time I go somewhere I want to remember... one day I'll string them all together and make a GIF of all my favourite memories! There aren't many full-length photos of me, but when someone does take one, you can guarantee I will be wearing my favourite shoes!

Which shoes do YOU like the best? COMMENT BELOW and tell us - or let us know about YOUR own favourite pair of shoes!
at May 17, 2014