We named this blog-zine DREAMCATCHER… so we thought we'd ask about YOUR dreamcatchers! Dreamcatchers were first made by the native American Ojibwe tribe to represent part of the web of the great spider goddess, to bring her protection. They are said to trap or capture bad dreams and keep the sleeper safe.

Hazel says:
I spotted this dreamcatcher in a gift shop in Sandia Crest, Albuquerque, New Mexico when my family and I were on a road trip recently. We were up on a ridge and it was cold and windy as we were ten thousand feet up above the city… down there it had been almost 100 degrees, and I was dressed in shorts and a hoody. So, basically, we went into the shop to warm up, but I am really glad we did! I saw the dreamcatcher and right away I thought you'd like it; after all, this blog-zine is named DREAMCATCHER! I had to take a picture to show you because I also thought it was the sort of thing Coco would love, because of the horses painted on it! I thought it was exactly the kind of thing she'd have in her box-room bedroom! I really liked it myself, it was just so cool, but at over $50 it was way too expensive for me. Oh well! 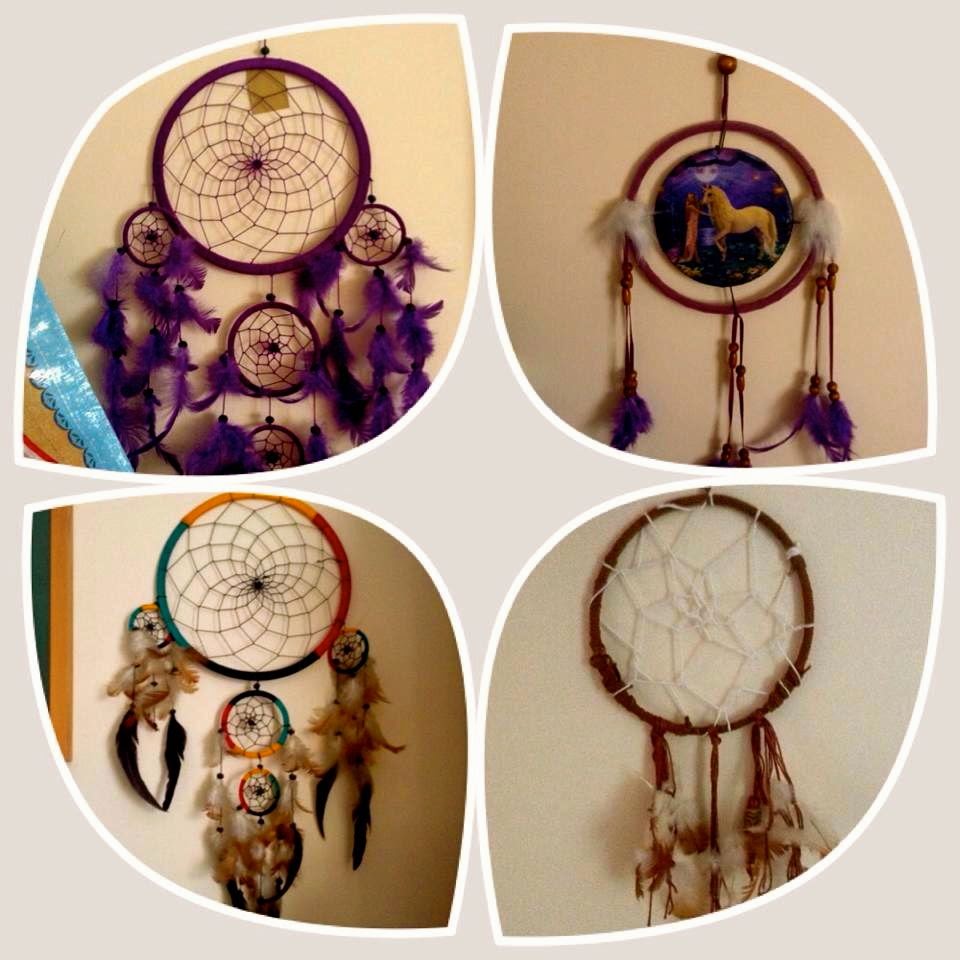 Kym says:
These are my dreamcatchers… I like them, can you tell? The one at the top left was a birthday present for my 23rd birthday… (yep, I have been reading your books since Dizzy came out!) The one on the top right was from a new age shop in Weymouth and the one on the bottom left was the first one I ever bought, about ten years ago in Spain. The one on the bottom right I made myself a few weeks back, to hang in my daughter's bedroom. You could say I'm building up quite a collection!

Blue says:
This is my dreamcatcher. It has a gothic style angel on it, and my mum bought it at a tiny (I literally mean TINY!) shop in Dumfries to make me feel at home after the second house move in less than three months. She knew I'd love it - I used to make my own as a kid and I love gothic stuff, so it was a very thoughtful gift. Dreamcatchers are supposed to capture bad dreams and keep them safe. I can't say if it works as a catcher of dreams as I don't really dream anyway, but it's a pretty cool thing to have all the same!

Charlotte says:
These are my dreamcatchers… I got them from a Sunday market a few years ago. I saw them on a stall, the feathers blowing gently in the breeze and I thought they were so cool - I'd always wanted a dreamcatcher. My friend had a huge collection and I thought they looked great. My mum let me buy two… rather reluctantly… and I settled on these. I'd been suffering from nightmares and I knew dreamcatchers were supposed to help, so I hung them above my bed and that night I had no nightmares. In fact, they helped so much I took them everywhere, on holiday, to my friend's house, anywhere I had to sleep away from home. These days they hang on my mirror, more as a decoration than anything, but I think they did help me beat the nightmares… perhaps it was just the thought of them, or maybe they really do have magical properties!
Cathy says:
I love these stories… do YOU have a DREAMCATCHER? Or would you like one? COMMENT BELOW to tell us what you think!
at July 30, 2014