HATE... AND WHY WE NEED TO TALK ABOUT IT

Sometimes, bad things happen - things that make no sense, that leave us wondering if the world is a dark, cruel place filled with people ready to hate anything that's different. This is a sad story, but one that needs to be told... 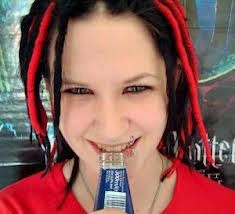 Cathy says:
Sophie Lancaster was a gentle girl who cared about others, had strong values and views and also the courage to dress the way she wanted to. She was a gap year student planning to study an English degree, and she and her art student boyfriend Robert styled themselves as 'goths'.
In August 2007 the couple were walking home through a park in Lancashire when they were attacked by a group of teenage boys. Robert was kicked unconscious; Sophie was cradling him in her arms when the attackers turned on her, kicking and beating her savagely. Teenage witnesses called emergency services and stayed with the couple, trying to help, until an ambulance arrived.
Robert gradually recovered, but it was clear that Sophie would never regain consciousness and she died thirteen days later. Two of her attackers were given life imprisonment for murder and three more were jailed. The attackers had targeted the pair purely because of their style, because they were 'different' - and after the attack they bragged to friends about what they had done.
Since Sophie's death, music, books and a play have been made to help tell her story and raise awareness. Her mum, Sylvia Lancaster, created the SOPHIE LANCASTER FOUNDATION, a charity which works to  'stamp out prejudice, hatred and intolerance everywhere.' I have heard Sylvia Lancaster speak and was so moved by her story; slowly, bit by bit, she is changing views and making a difference.

Now a new teen book, 'Hate' by Alan Gibbons, tells Sophie's story in a fictionalised novel format. I asked him why he chose this subject... 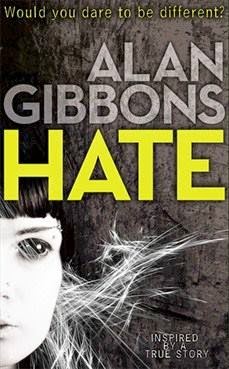 Alan says:
I first decided to write my novel Hate after hearing Sylvia Lancaster speak about her daughter at a conference. The story of Sophie, murdered for expressing her identity through dress and make-up, shocked me to the core. I've been involved in campaigns against hatred based on race, gender and homophobia for over 40 years, but prejudice based crime against subcults such as Goths and Emos is just as much a hate crime. The novel had to be written.

Cathy says:
The novel has to be read, too... I already have my copy. Hate is a strong, ugly word for an ugly, destructive emotion. Let's challenge it now, so that stories like Sophie's become a thing of the past.

You can buy Hate by Alan Gibbons at all good indie bookshops and chains, or order it online. It's a must-read. Did you know Sophie Lancaster's story? COMMENT BELOW on this post to share your views and reactions, and start challenging hate wherever you find it.