EILISH: I LIVE IN NEW ZEALAND!

Another in our series looking at readers all around the world… we meet Eilish, who lives in beautiful New Zealand! 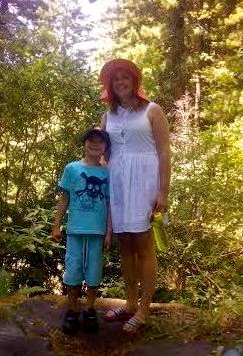 Eilish says:
I live in New Zealand, in a city called Dunedin; it's only a ten minute drive in either direction to find luscious green farms and hidden forests all around, even in the main part of town. I live with my mum and stepdad in a small old-style villa, over a hundred years old (impressive in NZ terms!). I have an older brother 'flatting' which is a big thing for students in Dunedin, and is basically a party, 24/7.

I'm in my final year at high school and honestly, I love it. Schooling here is varied - we have the choice of single sex or unisex school, though most have uniforms. All the schools I've been to are very relaxed and seem similar to what I've read about UK schools. My school are fine with individuality, so I can't even count the amount of students with dreadlocks and funky coloured hair and piercings. This isn't the case in all schools, though! My last school was a bit stricter. 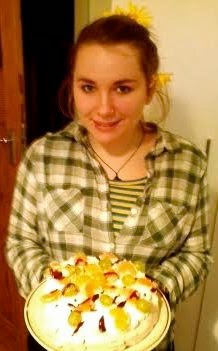 In New Zealand we have adapted traditional dishes from all around the world rather than having our own (unless countless barbeques during the summer count!) We do, however, have a delicious dessert, the Pavlova… created for a ballerina in NZ, to replicate her dress… although Australia tried to claim this as its own. It's basically a sweet, sugary baked giant meringue covered in cream and fresh fruit, and seen on most families tables at Christmas. I am holding some in the picture! Another food we have here is the cheese roll - basically, grilled cheese, rolled up like sushi, sold in cute cafes or made for school fundraisers… it's mouthwatering! It's quite local - people on the North Island don't even know of its existence!

Clothing is similar to the rest of the western world, except in winter, where fashion shouldn't apply. We dress for warmth! It can be pretty cold in my city - it even snowed today! 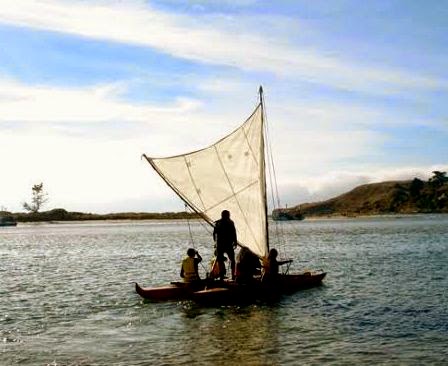 Up in the North Island it is a bit warmer, though! The traditional Maori clothing is very beautiful, but it's only worn for demonstrations and ceremonies, not on your average trip to town! New Zealand is a traditionally Christian country, yet there are many religions here, and all are accepted. I didn't grow up in a Christian house, yet in my teens I choose to go to church, which I find fun. We have free pizza, dancing, mosh pits and on youth nights we play many fun, messy games… if you're not at the rowdy rugby, that is! Rugby is a big thing in New Zealand, and most of the country supports the All Blacks. Matches are a big thing and a real party to watch. 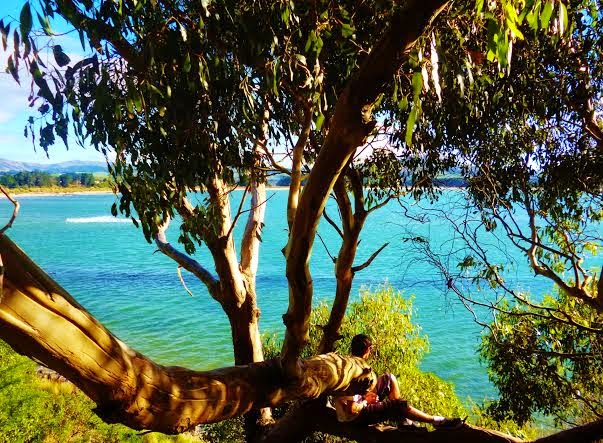 As well as the usual festivals of Easter, Christmas etc, we have a holiday called Waitangi Day at the start of the school year in early February. It marks when the Maori and the New Settlers made their peace and is typically represented  as a day of thankfulness with family and friends. These days, farming is a big part of NZ life - we have seven sheep for every one person here! If you live on a farm you have to help out, both before and after school… I'm glad I'm a townie! New Zealand wasn't always farmed - before the New Settlers came, when it was just Maori, it was covered in forest; and before that, in the time of the Moriori, the settlers before the Maori, it was the same. We have some absolutely gorgeous forests here and great scenery and plants, as well as gleaming coastlines. I love the powhutakawa tree with its bright red blossom and the kowhai tree with its yellow flowers. It really is a very beautiful country - I am sure you will have seen glimpses of the breath taking mountains while watching the Lord of the Rings films which were made here!

Before the Maori and the New Settlers made peace, there were many fights as the Maori did not want all the land to be taken over and burned into farms… they felt it was their land first. A series of agreements were made and we now live together in peace - I am very keen to keep it this way, and very proud of our Maori culture. My ambition is to join the New Zealand Navy, part of the defence force, do i can do all I can to help protect this country, its gorgeous waters and lands. I could not be more proud of New Zealand - words can't describe its beauty, it has to be seen.

Cathy says:
Eilish makes New Zealand really come to life - it sounds magical! I visited once a few years ago and loved it too… but now I am determined to visit again one day! COMMENT BELOW to share your reaction to Eilish's blog or to let me know if YOU would like to blog about life where YOU live!
at August 22, 2014